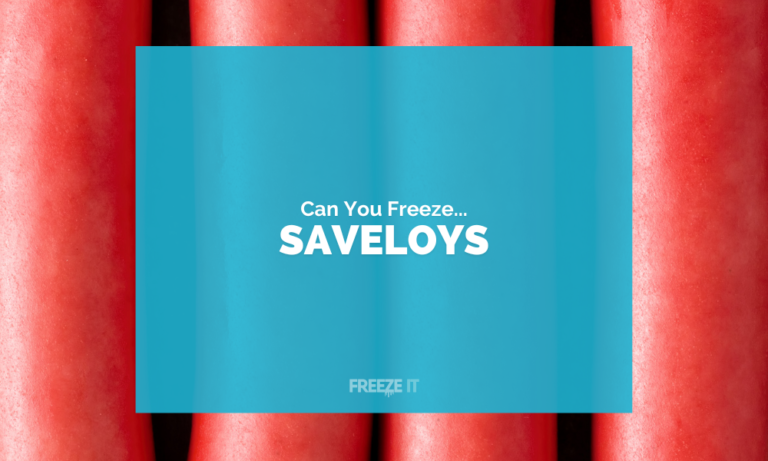 Saveloys are a type of highly-seasoned sausage, and typically bright red. They’re most commonly known as the sausages you get from a chippy in the UK. But, how do you store them for the long term? Is the freezer an option or not?

Can You Freeze Saveloys?

Yes, you can freeze saveloys for up to 2 months. Wrap them in a layer of baking paper, followed by a layer of plastic wrap. Place the bundle into a foil-lined container before placing it into the freezer.

Can You Refreeze Saveloys? Yes

How to Freeze Saveloys

This is our method for freezing uncooked, raw saveloys:

Can You Freeze Cooked Saveloy?

Yes, you can freeze cooked saveloys, but you must ensure they are cooled completely before doing so. Once cooled, wrap them in a sheet of cling film before placing them into freezer bags.

Now you know how to freeze them, we’ve got our 3 top tips which we strongly recommend following when freezing saveloys to have the best results:

Double Wrap
Double wrapping the saveloys in the right order (baking paper followed by plastic wrap) will ensure that no liquid from outside the bundle gets into it. This will also mean that any condensation or liquid from the sausages will form into frost on the baking paper rather than on the food itself.

Use a Tight-Fitting Lid
A sealed container will ensure that no ice or frost makes its way into the bundle you’ve created. If frost were to form on the sausages, this would lead to freezer burn, damaging the texture of the sausages themselves and leading to a poor final meal.

Keep Away from Delicate Dishes
Saveloys are highly seasoned, meaning they have quite a pungent odour, especially when cooked. Allowing them to spread that odour in the damp conditions of a freezer will certainly affect the other food poorly – consider this when storing the sausages.

How Long Can You Freeze Saveloys?

You can freeze saveloy sausages for between 1 and 2 months to preserve their quality to the best level. Freezing them for this long reduces the risk of freezer burn greatly while also allowing them not to lose any aroma or colouration over time.

Technically, you can freeze saveloys indefinitely since their high protein and fat content means that freezer burn shouldn’t affect their texture over time.

However, their aroma, flavour, and colour are likely to be lost through prolonged storage, which we recommend avoiding.

How Do You Defrost Saveloys?

The best way to defrost saveloys is to bring them to fridge temperature overnight, allowing them to thaw slowly and for the ice to melt and evaporate.

Leaving meat on the counter overnight to thaw will exceed that amount of time, leading to an unsafe ingredient in your kitchen. When thawed, they can be cooked as normal.

Can You Refreeze Saveloys?

Yes, you can refreeze saveloys. The thing that typically prohibits you from refreezing certain ingredients is that the water content is too high relative to the other ingredients.

The water molecules expand as they freeze, leading to an ingredient or meal with a ruined texture.

Yes, saveloys do freeze well. We say this because no real degradation occurs over time, with saveloys generally maintaining their initial consistency and flavour after being frozen.

This is quite the way with several different processed food items, as they have generally been processed to last longer. The prohibiting factor in these cases, though, is that aromatic seasonings degrade over time, regardless of being frozen.

Therefore, the flavour could degrade after two months while the food is still safe to eat.

If you’ve still got questions about freezing saveloys or saveloys in general, then these may help:

Can You Cook Saveloys From Frozen?

You can cook saveloys from frozen. Run them under warm water until any ice crystals have dissolved then wrap in greaseproof paper. Pop them into a microwave and cook in 30-second blasts until hot through.

How Long Can You Keep Saveloys?

Once opened, saveloys can be kept in the fridge for around 2 days before they are no longer safe to eat.

Got a Question? Find the Answer Below:

Lewis is a writer from Fiverr and cook from the UK – he loves to spend his free time in the kitchen creating odd and delicious Italian-inspired dishes. When not cooking, Lewis enjoys knitting, walking, and reading.

Discover How to Freeze Some Related Ingredients and Dishes:

Looking for Something Else?

Enter an Ingredient or Dish Into the Form to Discover Whether You Can Freeze It or Not:

Receive a Freezer-Friendly Recipe Every Friday

Freeze It was launched in 2019 to make it super simple to know what can (and can't) be frozen.

Got a query? Drop us an email: [email protected]