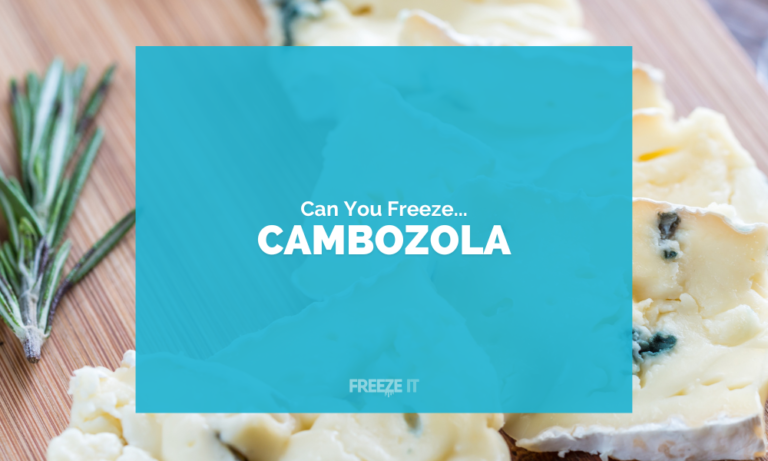 Cambozola is a hugely versatile cheese. It can be eaten on its earn, tossed through salads or even melted across dishes. But, like many kinds of cheese, it quickly loses its flavour. So, how do you store it for the long term?

Can You Freeze Cambozola?

Yes, you can freeze cambozola for up to 3 months. We’d recommend wrapping it in baking paper, followed by cling film. When wrapped, place the cambozola into an airtight container, and allow it to freeze.

Can You Refreeze Cambozola? Yes

How to Freeze Cambozola

When freezing cambozola, you need to manage the moisture levels, ensuring that the moisture content of the cheese doesn’t get too high, as this will affect the thawing process when it comes to it.

As a blue cheese, cambozola has a powerful odour. Manage the effect that has on the other items in your freezer by preventing the container from being open in there.

Now you know how to freeze it, we’ve got our 3 top tips which we strongly recommend following when freezing cambozola to have the best results:

Prevent the Cheese from Getting Wet
If the cheese gets too wet, you’ll be heading straight for some freezer burn. Cambozola’s structure is already quite weak, which means that the final structure, when thawed after freezer burn, can be even weaker, which results in a lot of mess.

Don’t Expect to Maintain the Smell
This cheese is blue, meaning the scent can be quite potent. If you’re looking to preserve that, freezing won’t work. The reason for this is that aromatic compounds still evaporate in a freezer – low temperatures don’t have much effect on them. Therefore, to maintain the scent, you’re better off just eating it quickly.

Get Ahead of the Curve
If you want to freeze the cambozola in your kitchen, do it as quickly as possible. If you don’t freeze your cambozola quickly enough, it will become mouldy and spoiled. Therefore, don’t wait for tomorrow or the next day to transfer the cheese from your fridge to your freezer – do it soon.

How Long Can You Freeze Cambozola?

You can freeze cambozola for up to 3 months without destroying the quality of the cheese in too intense a manner. This is because cambozola will freeze solid in the freezer quite well without also being able to stop losing its scent.

Therefore, over time, the pungent scent of cambozola will start to deteriorate as the aromatic compounds in and on the cheese evaporate and disappear.

Freezing will not prevent this from happening; the only way to manage this is to eat the cheese before it entirely loses that aroma.

How Do You Defrost Cambozola?

The best way to defrost cambozola is in the fridge. We say this because when the cheese gets to room temperature, even without being frozen, it will start to melt, like the inner core of some types of brie.

Therefore, to ensure that you don’t return to a puddle of cheese on your countertop, we suggest keeping the cambozola in the fridge for the time it needs to thaw.

Can You Refreeze Cambozola?

Technically, yes, you can – though we strongly advise against it.

Cambozola has a large amount of moisture in it, the cheese turns to a thick liquid when at room temperature. This means that when it freezes, the cambozola turns to a virtually solid block of ice, which ruins the texture.

If this is done repeatedly, the cambozola will lose all of its texture, and even when kept in the fridge, it won’t hold its shape. Not only is this messy, but it also ruins your general enjoyment of the cheese.

Provided that the cheese is only frozen once and not refrozen to be thawed later, yes – cambozola does freeze well.

Though not enough to become entirely terrible, Cambozola will lose some of its general texture when frozen. Though frozen more than once, it can become truly bad, which would be a great shame.

If you’ve still got questions about freezing cambozola or cambozola in general, then these may help:

Is It OK to Freeze Blue Cheese?

Yes, it is OK to freeze blue cheese. Purists would argue that it will impact the flavour, and this is the case, but it’s not drastic and it will still be great to use – especially in cooking.

How Long Can You Keep Cambozola?

Cambozola can be kept in the fridge for several months, providing that it is wrapped tightly in greaseproof paper.

Got a Question? Find the Answer Below:

Lewis is a writer from Fiverr and cook from the UK – he loves to spend his free time in the kitchen creating odd and delicious Italian-inspired dishes. When not cooking, Lewis enjoys knitting, walking, and reading.

Discover How to Freeze Some Related Ingredients and Dishes:

Looking for Something Else?

Enter an Ingredient or Dish Into the Form to Discover Whether You Can Freeze It or Not:

Receive a Freezer-Friendly Recipe Every Friday

Freeze It was launched in 2019 to make it super simple to know what can (and can't) be frozen.

Got a query? Drop us an email: [email protected]